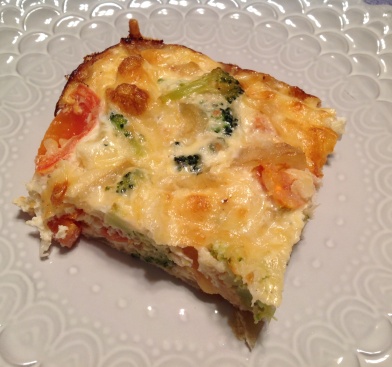 Great for breakfast, lunch, dinner, and everything in between!

Quiche and I have a solid history – I used to make them for and with my grandma, I made them a ton when I moved to Boston, I buy them for lunch sometimes at this delicious place downtown.  But what do you do when you really don’t need that crust anymore, and would rather save the calories and room in your stomach for something else?

I came up with this recipe, which is the kind of frittata that falls somewhere between “crustless quiche” and “baked eggs”, because I wanted something light for dinner that could also serve as breakfast or lunch, and I wanted it to taste like summer – as fresh as possible.  I ate this for almost a whole week and never got tired of it – so good!

This recipe and its simple ingredients make two whole pies worth of delicious frittata, for 4 PointsPlus for 1/8 of the total serving.  Since I used similarly sized pie plates, this means I could eat 1/4 of a pie (2 pieces) for less than the value of two pieces of toast with peanut butter.  So good, so simple, so healthy!

What’s your go-to breakfast, for now and later?

This simple recipe is great for the end of a busy week and can accommodate almost any ingredients you have around.  Sub couscous for quinoa, add in other veggies, or include other proteins if you have them handy.

This made about four salad-sized servings – can’t wait to eat it for lunch later this week. 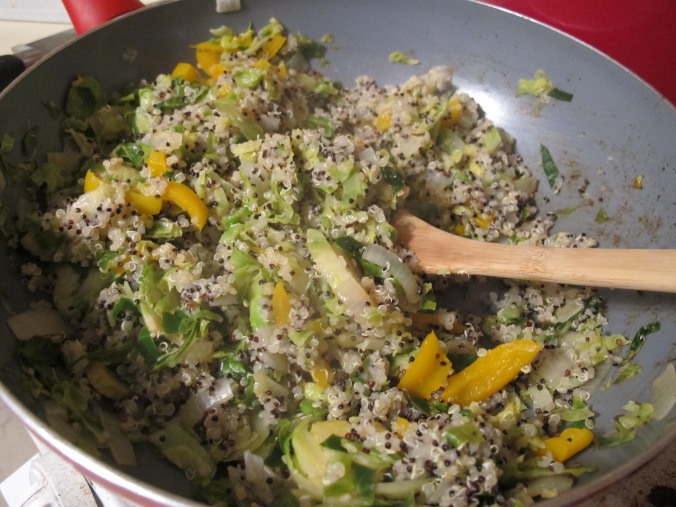 There is basically never a time when I don’t want a stuffed artichoke since my college roommate first introduced me to this delicacy. (Hi Jill!)  It’s not the fastest thing in the world to make, but it’s completely worth it, especially when you can start eating it before going out with your friends and finish the rest when you come home starving after a night of dancing… if you can stand to not eat it all in one sitting.

C’est tout!  Just peel off the segments and eat them from the base, and then attack the middle with the fork once you get past the rougher outer layers.

Did your college roomies ever share tasty treats from home?  What do you put inside your stuffed artichokes?

Making potato pancakes in the food processor my mother got me at the Republican yardsale (see dated visual below) while listening to Christmas music = multicultural win.

These pancakes made for a delicious and pretty healthy dinner because they were baked instead of pan fried – few opportunities for them to soak in grease!  Make these for a week of lunches, for a party, to freeze, or in advance of a family brunch – I promise you won’t be disappointed.

Potato pancakes with sour cream and applesauce = dinner of champions

Potato pancakes right before being popped in the oven

These are so good, I had to pack them up just so I would stop eating them.  Assuming that you make about 30 total, a serving is about 3 or 4, and they have about 1 PointPlus each.  In other words, they’re part of – or all of! – a tasty dinner… and lunch… and breakfast… and life!  These are definitely going to become a staple in our apartment, even after the holidays.

My almond-colored, TWO-speed, “made in America (buy American!)” food processor, circa 1987 and courtesy of the local Republican yard sale.

The other secret win of this recipe is in the machine itself – I have a really bad habit of planning whole dishes without knowing for sure if my appliance is going to work at all/fit the quantity of food I’m making.  Case in point: my Republican blender is NOT as successful an appliance as this one and my beaters are not equipped to handle double batches of tahini bread.  But the fact that this food processor even was able to power up, and then worked exactly as I wanted it to, is a major victory.  Thanks, Mom!

With Christmas approaching, I pulled out one of my great gifts from last year – a Silpat baking mat.  I wanted to see if this mat could amplify my love for tofu (and if starting cooking before I was starving would give me time to bake tofu for once) and I was not disappointed.  Here are a few steps to perfection: 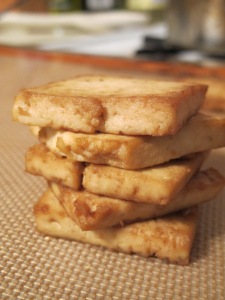 Enjoy!  I ate mine with spaghetti squash and poured the remaining marinade over the whole dish (bonuses of cooking with tofu: you can stop to eat the ingredients at any time AND you can reuse any leftover marinade safely.)

PS: I do actually cook more than just tofu – proof is here!  For Thanksgiving, I made a new Brussels sprout dish and lots of different egg concoctions.  What have you made or eaten lately?

Yes, it exists. I love tofu in any form, but this recipe is the only one I can make and want to eat the tofu raw, and a few pieces usually get sacrificed to “taste testing” before they can reach the pan.

All it takes is mixing a few items together:
2 tbps Mirin (a sweet Japanese seasoning made from rice alcohol – keep this in your cupboard for tons of recipes!)
1 tbsp sesame oil (hint: you can get this cheap at the Christmas Tree Shop! I use it basically every day.)
1 tsp Tamari (soy sauce)
1 tsp Teriyaki sauce (I used the low sodium version)

Cut up the tofu into small cubes and pour the sauce over the top. If you have time, try to marinade for an hour or two, stirring every once in a while. If you’re in a rush, just let this sit while you prep everything else.

You can either add the extra sauce to the pan after, or use it on a side dish – I threw mine, along with some extra Mirin and Tamari, over some asparagus I was cooking at the same time. Incredible!

What’s your favorite way to give tofu some flavor?

An acorn squash shell, to be exact.

My obsession with simply-cooked acorn squash has me buying them in multiples every time I go to the store.  Settling down to one for dinner (or as part of dinner) is the perfect way to end a blustery fall day.

All it takes is a small acorn squash, goat cheese, and brown sugar.  Start by cutting the squash in half, and scooping out the seeds and the pulp with a spoon.  Then put both halves of the squash cut-side down in a small microwave-safe casserole dish (mine is about 10″ across) with 1/2 inch or so of water in the bottom.  The goal is to give the squash enough water to steam, but not so much that it will take a long time to get hot.

Cook on high for 5 minutes, then poke the outside of the squash to see if it’s soft.  My small squash tonight took 15 minutes to cook fully, but it’s a good idea to check every 5 minutes and then just add more time to the clock if it needs more.  The inside should be bright orange-yellow and the outside should be tender when poked for it to be done to my standards.

Remove from the dish, top with goat cheese, salt, pepper, and a tablespoon of brown sugar.  And voila – you’ve got dinner!  This is also really good reheated the next day, but I’ve only made it that far once and have succumbed to eating the whole thing every other time.  If it’s all you eat for dinner, you might be hungry later – this dish is only worth 3 PointsPlus (aka super healthy).

Yes, you read that right.

Pie crust is the latest casualty in my quest to get healthy and still enjoy delicious food.  Especially since I don’t have the patience to make my crust from scratch, it’s hardly ever worth the extra calories and I would rather have my pie/quiche/pudding naked than have half the slice I could if it included crust.  This week, I decided to reinvent my go-to food of quiche in this mindset, and the result was AMAZING.  The roomie and I will be enjoying it all week with more to freeze!  Here’s how this magical dish came together: 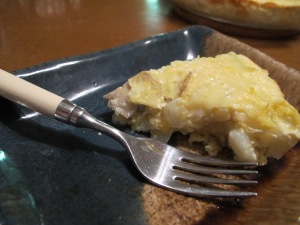 Base – can be adapted for any crustless quiche!

For me, this made 16 servings, each with a PointsPlus value of 4.  See what I mean about amazing?  This is going to be a delicious breakfast/lunch/snack for this week, a new standard meal in our little apartment, and a good option when I want to cook for my gluten-free friends.  Furthermore, it’s proof that you CAN enjoy good food without all the carbs – just kick them off the plate!

What do you like to put in your quiche?

Tahini and I have a thing going.  Once I open a jar, all I can think about is how I can mix it into whatever dish I’m preparing.  Eggs, pasta, spinach – you name it, I’ve tried to incorporate tahini into it.  I even have more than one muffin recipe that calls for it (weekend project!).

Last night, I took that obsession to a new level when I ripped this 101 Cookbooks recipe for Miso Sesame Winter Squash apart so I could incorporate my favorite ingredient of the moment and keep from spending more than an hour in the kitchen.  The result was delicious (but I bet the original would be too, if I had any desire to buy molasses and if Boston was able to get more than four kinds of squash in February). 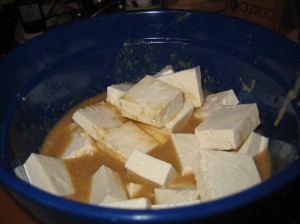 Phew!  By the time I took this recipe and turned the entire thing on its head (sauce concept, type of squash, cooking technique), it was an hour later, but it was still super delicious and totally worth it.  The orange really came through in a surprising and tasty way.  This made enough that I had two servings last night, put two away for lunch, and packed another one away in the freezer for some later date.
What’s your latest cooking adventure, real or hoped for? 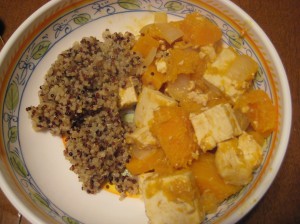