That’s how my stomach felt last week, as I coordinated the final pieces to live out a lifelong dream – going backstage at a Broadway musical. My friend Tory, as she departed Boston for the bike paths of Bolivia, connected me with her famously awesome aunt, Tony winner Victoria Clark. I’d seen her before in Light in the Piazza and Cinderella- now, she was sharing the stage with Vanessa Hudgens in Gigi (new and improved, with slightly less creepiness than its film predecessor).

Some text messages with Vicki, a call with the company manager, and a ticket to the box office later, my sister and I were off to the theater for the Friday night show, just before this weekend’s Tony Awards.

The show itself was wonderful – we sat in row K, surrounded by other friends and family of various actors. We could see the small mics on people’s faces and had a perfect view of the beautiful stage, with its Eiffel Tower set and sweeping staircase. Victoria had as many songs as Gigi herself, and the cast worked perfectly together.  The plot was… faulty… but I have to assume it made more sense in Colette’s era than it does in 2015. And really, if props are flying across the stage on invisible wires, dancers are kicking in a chorus line, and big dance numbers end in goofy grins, I’m going to be a happy camper.

After the show, we went over to the stage door, around the crowd waiting to meet Vanessa and into the queue to enter backstage.  My name was on the list (spelled right!) and we waltzed right in… and right onto the stage itself.

It was everything I imagined and nothing like what I pictured.  It looked so much like the boxy, black backstage where I spent so many afternoons as a stage manager in high school. The view from the wings was just that – lights in your face, and red velvet seats staring back at you. Masking tape on shelves with props resting in their place.  But when you looked out… you were on Broadway.

We met Vicki’s dresser, Vicky (!) who told us about the shows she’s worked on and how crazy Tony rehearsals were. Then the star herself came out and we got to chat and take a picture together.

Milling all over the stage were other actors and their loved ones. Corey Cott said hi to his friends, Vanessa Hudgens gabbed with some guests, and people posed on the steps (obviously, we had to join in).

My friends had told me to look out for Max Clayton, a Manchester native making his Broadway debut here. I caught him in between other guests and he was so sweet, especially when he found out that we were from NH. We talked to his aunts, who were visiting, and it turns out that we know a bunch of theater people in common (small state FTW).

When we left, I tried to put on my sunglasses and sneak out the stage door where Vanessa was still signing autographs, but Kat and the security guard wouldn’t let me.  Next time…

Being on stage reminded me how similar every theater is, if it’s a place – and an idea – that you love.  And it also reminded me of the magical spark I get from theater – and why I really need to get out of the seats and back into it.

This whole experience was also a massive lesson in not giving up on your dreams.  I was 100% sure I was not going to accomplish this before I turned 30, and I’m so so so so so glad I was wrong, because it was incredible and it never would have happened if I hadn’t put in the effort.

Massive thanks to Victoria Clark for the friendly welcome backstage and to Tory for helping make this dream come true!

My name is Sally, and I’m addicted to musicals.

There are some that have meant a lot to my life – like Grease, which brought me some of the best people in my life when we did it in high school, or the Sound of Music, which Grandma Sugarplum and I would sing together.

But I can only think of three performances where the show itself – the sheer musical content and drama – kicked me in the gut so hard that I watched with my hand over my mouth, willing time to slow down so I could stay in the moment forever.

The first: A Chorus Line – I felt like I had just broken my ankle and lost my life’s dream.
The second: Wicked – in the front row in London, watching Idina Menzel – sorry, Adele Dazeem – take to the skies.
The third: Finding Neverland – here in Boston, with Jeremy Jordan killing it in the lead role. Be still, my heart. But seriously, I was never a fan of the movie but thought the show sounded fun and it blew me away, to the extent that I bought tickets for my family to see it first thing the next morning.

(Later, when I saw Charlie and the Chocolate Factory in London, I held it against this example of unexpected, amazing childhood fun and it came up sorely lacking.)

Don’t take it from me – go see Matthew Morrison take back this role on Broadway, and Laura Michelle Kelly continue her reign of glory as the leading lady. I know I’m going to see it again!

(Ok, the fourth was Spring Awakening – and the fifth was Joseph and the Amazing Technicolor Dreamboat – and the sixth was Les Mis – and the seventh…)

As I’ve gotten back into the world of online dating, I’ve had my share of awkward online interactions.  (No, if chat is turned off, I probably don’t want to chat, especially if we’re a 30% match.  And yes, I know I have a nice smile, I had braces twice and still wear my retainer diligently – but did you see that I also have an entire profile!?!  Also… hi.  Just hi.  Apparently that’s a thing now, along with profiles composed 100% of selfies.  C’mon Boston – you can do better!)

But nothing is more awkward than that moment where it’s just not quite clicking after a date or two – not so many that it’s worth a phone call or a drink to say goodbye, but just enough that you feel obligated to come up with excuses to not see someone again.

My work friends and wise sister recently convinced me to stop taking this wimpy option and actually tell someone that I wasn’t feeling a spark instead of fading away, and it was TOUGH.  Finding the words, and actually sending them, made me feel like a giant jerk.  But it also closed a door that I didn’t need to keep open (kind of like Tabless Thursday!).

In honor of the wimp’s way out, I bring you this gem that my mom made me watch this weekend as part of Garfunkel and Oates’s new tv show.  It’s perfect.  And I DO want to see it again.

Thanks to Laura for sharing this wonderful twist on the Frozen craze – watch it now, before it gets taken down!  The chorus is the best part, by far.

Just because the year’s over doesn’t mean we’re safe from the earworms that defined our year – those dudes at the thrift shop, that chick on the wrecking ball, the techno beats that wake us up and get us rocking.  Having a Spotify account this year made me so much more hip as I could listen to these songs as they came out.  What will 2014 hold?  Dare I predict… a lot of Beyonce?

This is my latest jam – for sunny mornings, rainy afternoons, days when I’m missing camp and our own game of cups (ours involves passing it down the line at increasing speed – take that, Anna Kendrick!). I love the musical background and her voice. Learning to play this is my next musical adventure – stay tuned to see how it goes!

As usual, the Maccabeats have come out with a catchy video to kick off the Jewish holidays.  This time, it’s less about creative new lyrics and instead focused on the crafty repurposing of the Les Misérables songs to tell the story of Passover (with some mighty fine singing in the process, though I would have liked to see them hit those high notes…).

Check it out below – and check out my matzo brei recipe if you’re looking for a way to spice up your unleavened bread.

Every day, I check the marquee of the Orpheum Theatre on my way to work.  Whose tour bus will be blocking my door this week, I wonder?  But for the last few days, I looked up with an extra smile because I was actually going to see the band whose name was displayed – it was time for me to have some FUN.

It was surreal to actually be inside the theater for the first time – it felt like walking into Mary Poppins’s bag, like “how could this large space possibly fit in the downtown Boston that I know?”  The opener was underwhelming, the beer was $13, but the seats were good and FUN. was amazing.  They rocked the house, even if they did play a little too much new stuff for my fellow fans’ taste – it’s rare to find a band that sounds as solid in person as in the studio.  They also brought the Boston charm for encore #1 (photo courtesy of the lovely Katie Catano).

My favorite part was just how much they enjoyed playing, and their newfound fame.  When they held their mics to the audience to let us sing “SO WE SET THE WORLD ON FIRE, WE CAN BURN BRIGHTER…” the looks on their faces were of mild disbelief and sheer joy.  This is my absolute favorite part of live music – seeing the face of an artist who clearly is still wondering “What did I do to deserve this, to get all these people to pay ME to sing to them, and to have people who not only like my words and tunes… they love them so much that they know them by heart?”  If that isn’t the point of getting famous in the first place, I don’t know what is.

Here’s their megahit – trust me when I say it’s even better in person.

I might be a little late to the party, but I am obsessed with this 2012 pop mashup.  From the paths of the Hole in the Wall Gang Camp to Logan Airport to the streets of Boston and NYC, this is what 2012 sounded like – and I loved it all.

What was your favorite song of 2012? Let me know and you could see it here some future Monday!

In case you ever wondered what it’s like to live in a swing state, it’s a little bit like this: 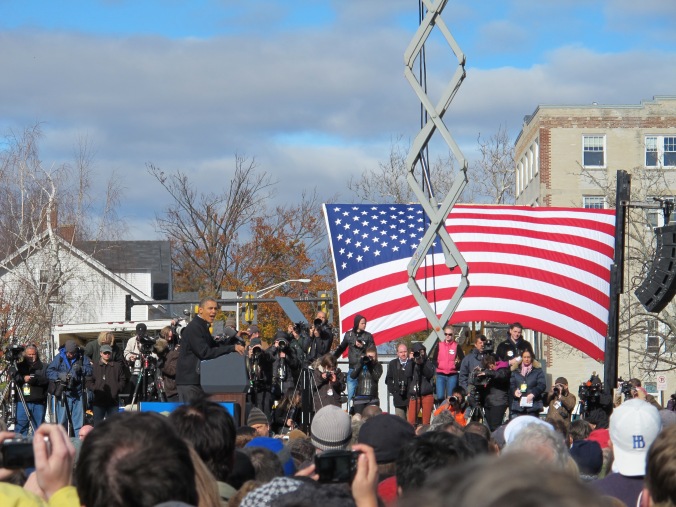 I was one of 14 thousand people who showed up to see POTUS and “OLD POTUS” (as my mom says) in Concord New Hampshire yesterday.  Five hours in the cold gave us plenty of time to think about tomorrow and what’s actually at stake in this election – healthcare, equality, women’s rights to make decisions about their own bodies, climate change, and more.  So while I know the ads are getting annoying… we’re tired of people knocking on our doors… you can’t stand to see another poll or political pin… just remember what’s on the line.  And don’t stop thinking about tomorrow – and then DO remember to vote tomorrow.  The future of our entire planet could depend on it.

Still not sure where to cast your ballot?  Click here to find out!