If you missed part 1, you can check it out here!

Now the hard work began. The 1.4 miles between Lakes of the Clouds and the summit were the roughest miles I’ve hiked yet. The trail was basically built before switchbacks, so it’s straight up, stepping from rock to rock to rock to rock to… you get the picture.

Kate with Monroe in the background – only when the skies cleared could we confirm that the pile we had been to was truly the top!

On top of that, add 30-50 mph winds – the next day, they were expected to get to 70 mph. I found the sound to be the worst part – I had my buff over my ears, but my windbreaker was whipping in the gusts and flapping about my head (tip #4). The roaring made it hard to concentrate on steps and generally wore me out much faster than I expected – Kate’s work in a noisy brewery prepared her a bit more, but we were both windblown when we got to the top. Still, it was a gorgeous view along the way.

One of the Lakes of the Clouds, and Kate on the trail off to the right

As we hiked, we could occasionally see the weather towers at the summit peek into view. When we got closer, the clouds moved in again, but at least we knew we were going the right way. And the minute we stepped onto flat ground, mom and dad were standing there to meet us! They took the Cog railroad to the top and had been waiting for us to arrive (tip / lesson #5…). 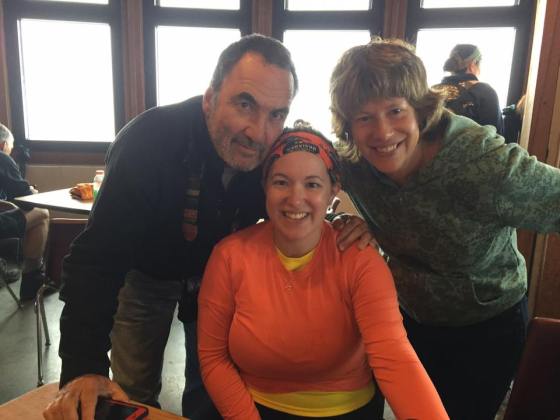 Me and my support crew!

We hustled inside, grabbed a table, and ate our pre-packed PB&J while sharing our adventures. They served food at the summit, but it looked too greasy to be good for hikers. We also changed into fresh shirts, visited the gift shop, and wrote out some postcards. Overall, the summit was exciting but also incredibly frustrating. A friend had warned me that I would basically want to punch everyone there and it was true – we had been hiking for 5+ hours and were waiting in line for the bathroom with people wearing flip-flops and taking their dear, sweet time before driving down. People in the gift shop, wearing only fresh cotton sweatshirts, crowded us and bumped into our packs and poles. We had worked so hard to get there – to fight for space on a bench with a kid in a tshirt eating an ice cream cone or to wait in line with dozens of people to take a photo with the summit sign was not the reward I was looking for.

My feelings about the line at the summit

And thus we scurried away, down the Jewell trail. By then the skies had cleared and we had incredible views on the way down, partly because there were no trees for hours. This is not a trail you can take in bad weather – it’s totally unprotected. But I had rechecked the forecast with the weather specialists at the top and confirmed it was fine for our next step. And step we did – rock to rock, putting our feet on those whose lack of lichen showed that people had tread there before. It was hard going and hard passing, but we got to know some of our companions – specifically a family of four whose two kids (7 & 9) who we hiked near for hours and chatted with a bit. When we did stop, we had to remind ourselves to drink, despite the extreme lack of anywhere to pee (even a two-foot tall bush can be called “good enough” after a certain amount of time…).

The cairns marked less of the actual trail and more “go this general direction” and we obliged, disbelieving that we could possibly be going so up and down on our way to the bottom of the mountain. We watched the Cog creep by as we went – even climbing over the rickety tracks at one early point – before finally reaching tree cover about 90 minutes from the end.

The trees were a welcome reprieve from the wind and stones, and made the last bit seem faster. However, the mossy rocks also caused me to slip and fall once – leaving some nice bruises in the days that followed. Thank goodness for giant backpacks keeping me from fully falling backwards!

At 7:30, with about an hour of daylight left, we emerged from the woods to a final brook crossing… and there were mom and dad, again! We had made it! We were hiking for 10.5 hours and on the trail for a little more than 12, and still had energy to go out to dinner that night. Victory indeed!

Stay tuned for the final installment in this story, including the story of the Cog and my tips for future hikers, next time!

We came.
We saw.
We bundled.
And we climbed.

After months of planning and training, I successfully climbed (and descended!) Mount Washington in New Hampshire on July 31.

We – college bestie Kate, and pit crew mom and dad – drove up north on Thursday after a morning of baking, yoga, and softball. We drove straight to the trailhead – I didn’t want there to be any question in the morning about where we were actually entering the woods, and I also wanted to check the signs to make sure nothing would stand in our way (tip #1!). Then we headed to the adorable Airbnb we called home for the next few days – it was perfectly situated just a 20 minute drive from the Cog Railroad parking lot and the trails we were planning to take up and down (tip #2!). 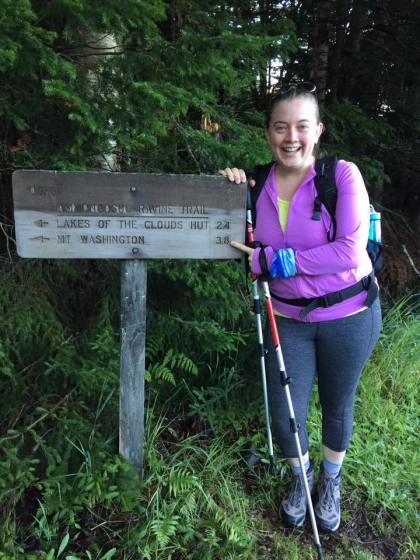 After an early night (of settling Catan), we were up and out and on the trail by 7:15 AM. It being a Friday, we saw only a few people in the first hour.  The trail we took – Ammanoosuc Ravine Trail – had some great landmarks along the way… but since we started at a slightly different trailhead than what the book measured from, we actually had no idea when to expect them.  Still, we enjoyed waterfalls, jumping from stone to stone to cross rivers, walking on logs over ravines, and even climbing a little ladder. 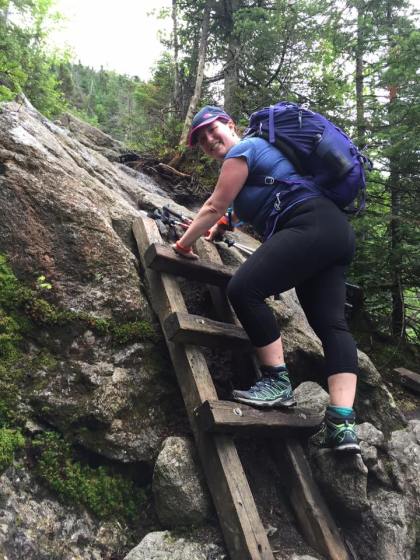 We saw maybe 30 people total between the base and the Lakes of the Clouds hut – mostly, we were able to share the trail well (despite some campers who were racing to the top and not so much caring about right of way). Our biggest traffic jam actually turned out to be a waterfall crossing my research had warned me about… but we were so caught up in the flow of the hike that we didn’t realize it until we were done – I didn’t even take a picture of the falls, just of the rock wall!

As we got toward the top, we could see beautiful views off in the distance.  We broke through the trees just as the one steam train of the day chugged up the mountain, and were able to watch it make its slow way up the slope.

We had been hiking for three hours when Kate said “I see a roof!”. I laughed – all I saw ahead of us was fog and surely we hadn’t gone far enough yet.  But lo and behold! There was the Lakes of the Clouds hut, appearing and disappearing as the wind whipped the clouds around the mountain.

We stopped in for $1 lemonade and to peek into the bunk rooms, signed the guest book, and decided that we felt spry enough to take on another challenge: Mount Monroe.  It was only .3 miles away – how could we resist?

The path was rocky to say the least, and we got our first full taste of the force of the wind.  We could barely see 15 feet in front of us, but we kept to the path ok.  Every time we came to a high place, we thought it was the top – and only then could we see to the next mini-peak.

After about 25 minutes, we came to a flat-ish section of rock with a thin metal rod in the edge – no sign, no geographic marker… just a metal peg. “This must be it,” we declared (tip #3!).  And thus, we took a selfie, wrapped our windbreakers a little tighter, and headed back to the Lake of the Clouds hut for the final mile and a half of the hike up. 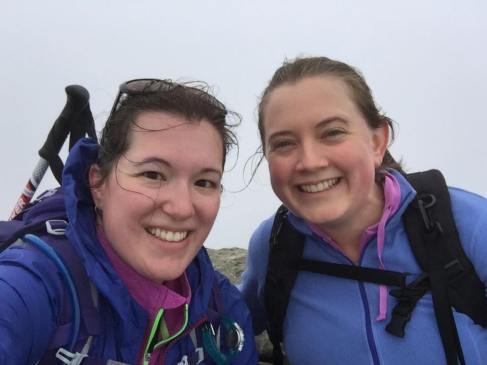 And that, ladies and gents, is a story for another day – I stayed up late writing this and watching the GOP debate (aka strengthening my resolve to work for Hillary), so I’ll tell you more about the trip to the summit and the way back down on the next pass!

We successfully summitted Mount Washington AND Mount Monroe – all in one day!

Lots of stories and lessons later – both from the hiking duo and our Cog railway buddies, mom and dad.

For now, here’s proof of our triumph over fogginess: 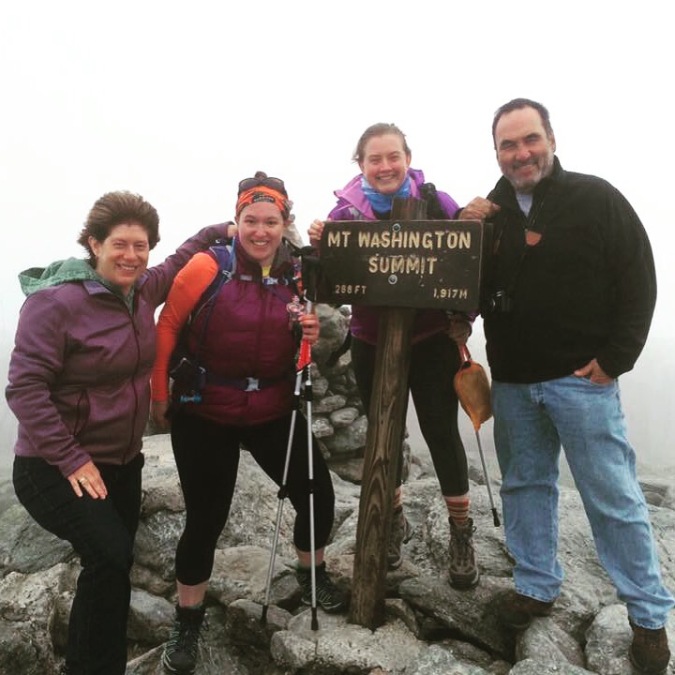 After months of dreaming and scheming, plotting trails and taking hiking classes, new backpacks and trial snacks and sweaty climbs on the stairmaster at the gym, tomorrow we head out for the real deal: Mount Washington.

We’re heading to the Whites and crossing our fingers that it stays nice for hike day, Friday. I’ve never cared about weather patterns as much as I have this week – willing a cold front to make up its mind about how quickly it’s going to move across the Presidentials. We’re ready for any conditions, but I’d love some sunshine and clear views if possible. 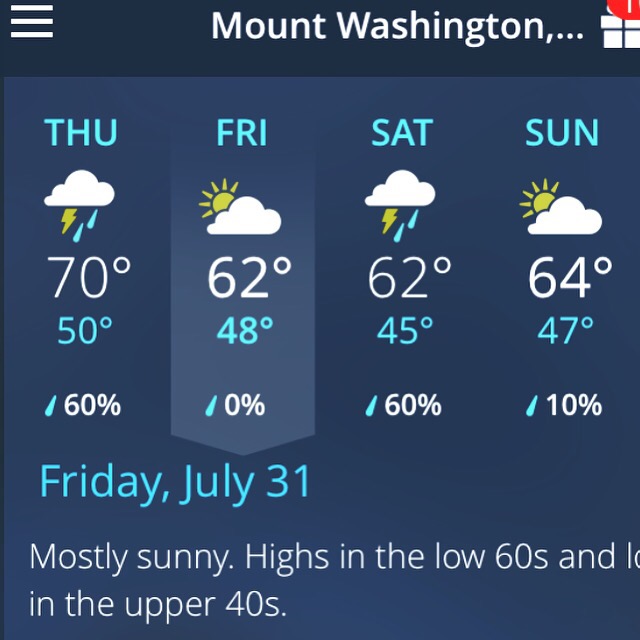 We’ll have spotty reception up in the mountains but will certainly report back, if not from the top.

Send us sunshine-y wishes, and no stumbles – and maybe work to check something off your own bucket list this week in solidarity!

This week was my first lecture as part of the Boston chapter of the Appalachian Mountain Club spring hiking course (say that five times fast!).  I expected the class to consist of 30 people who would all become my fast friends over six weeks as we shared stories of blisters and dreams of windy peaks.

Erm, not so much.

When I arrived at the AMC office on Beacon Hill, I was one of a dozen people all rushing in slightly late. I paid my $65 fee and was handed what can only be described as a brick of a guidebook, as well as a carefully curated handbook. Maybe this is actually kind of serious, I thought to myself as I looked for any open seat in the room that held more than 125 people.

The goal of week 1 was to terrify you into never wearing running shoes or cotton in the woods ever again, and it definitely worked. The clothing workshop also made me realize that I need to spend about $500 just to get my basic gear up to snuff – gulp. But everyone was nice and encouraging even as they called cotton the devil. I can’t wait to see what part of hiking I’m woefully unprepared for next! 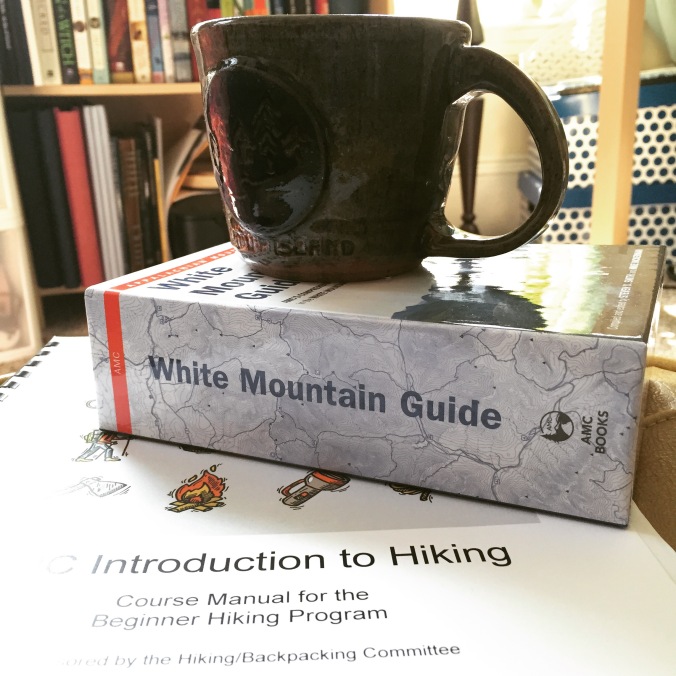 (Trying not to read too far ahead in the book to keep the suspense alive!)