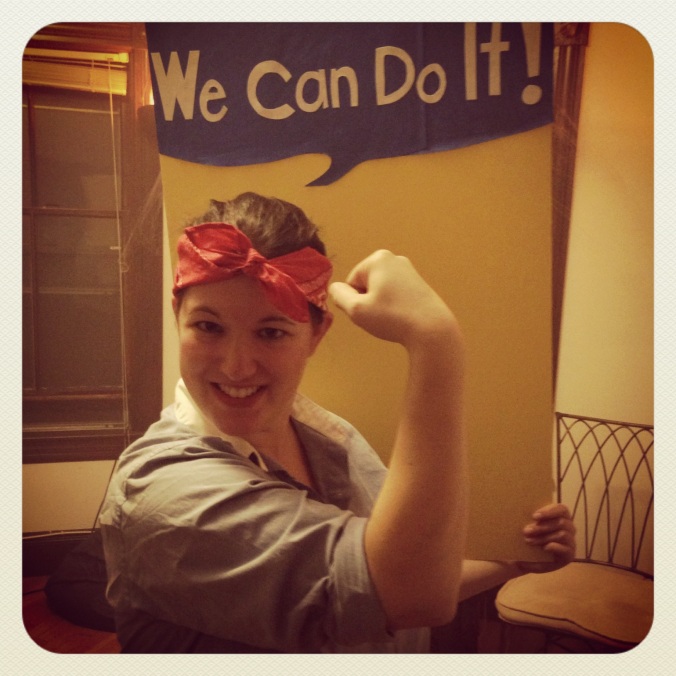 That’s me as Rosie the Riveter at a Halloween party this weekend. I realized on my way there that this is the third year in a row I’ve portrayed an awesome lady leader (or symbol) with my Halloween costume.

Since we went to a house party last night, I was relieved to see a binder full of women on my way to the gym this afternoon. My Halloween wouldn’t have been complete without it!

What awesome costumes did you wear or see this year?

Don’t get me wrong – if you’ve waiting all year to express some element of your personality that you would regularly hide, and that part of your personality likes to show off its cleavage and wear super short skirts, then you should go for it!  But Halloween is still the time of the super double standard, as this website (contains a swear in the title, FYI!) so clearly demonstrates.  Men can be lumberjacks – women can only be sexy lumberjacks.  Or sexy nuns, astronauts, teachers, etc.

Even worse: the way that this holiday has been co-opted to reinforce gender stereotypes even for kids.  Even as our society continues to come to terms with the fact that some women might not dream of a wedding day with a white dress, and some men might want to wear a skirt now and then (I freaking love skirts, and can’t imagine people not wanting to get in on this fun!), or the fact that some people might like to make their choices about outfits, hairstyles, relationships, and bodies without fitting into some gender norm, I think that Halloween was supposed to be an escape from that.  A time to see if the skirt really does make you feel more like yourself, a time to imagine what it might be like to grow a beard, or have a cape and pretend to fly.

When I was a kid, my close group of girl friends and I took this to an extreme:

Answer: no.  It shouldn’t.  I really hope we can step away from stereotypical gender roles – as a country, society, community, generation, you name it! – and make Halloween back into something fun.  It could be an example of personal expression and acceptance.  There’s literally nothing to lose here and everything to gain.

Do me a favor: When you see an awesome kid trick-or-treating this Halloween, consider what message you can send them about who they are and how they show themselves to the world.  Are they clever, in addition to being pretty?  Are they “so cool” in addition to being strong?  Or are they just awesome for taking a chance and trying something new (especially if they skip the store and make it themselves??)?  Maybe all of the above.

When it comes to Halloween, I am a total wimp.  My favorite Halloween movie is Hocus Pocus.  I lost nights of sleep the first time I saw The Ring.  When Laura, Katie, and I visited a haunted ship, I almost cried when the ghost-hunting thingy kept lighting up red only right in front of my face (which apparently meant that there was an evil dementor/ring wraith specter hovering in front of me, according to the guides).

So when I saw this post with photos of people being genuinely scared out of their minds in a haunted house, I could totally relate.

The scene: as you’re walking along a dimly lit path, people jump out at you and then a car drives out of nowhere, barely braking in front of you

… and that’s just the beginning.  Some of the best are posted here, and the full catalog of fear is on Flickr.

If this looks enticing to you, better head to Canada without me… looking through these pictures of people in pure terror gives me enough of a chill to call it a day.

Do you love or hate haunted houses?  Are you scared of Halloween, ghosts, witches, or something totally mundane?  Spill!