I just got back from DC (on a 6 am flight because Meg and I are ridiculous) – highlights of my trip including snuggling a friend’s new baby (Ollie!), seeing the Burning Man exhibit at the Renwick (fascinating even if I’m not totally shipping it), and eating breakfast – ok, and then also wine – with Meg at the all-women DC social club, The Wing.

This place is a pastel Instagram dream. I’ve never been into one of the “good old boys” social club but I’ve read about them in many Victorian novels – if they channel a theme as well as this place does, I can completely understand why the chaps would never leave.

From velvety easy chairs to a wicker and pink cafe to phone booths named after feminist badasses, The Wing is a remote workspace, common room, spa, and lecture hall. 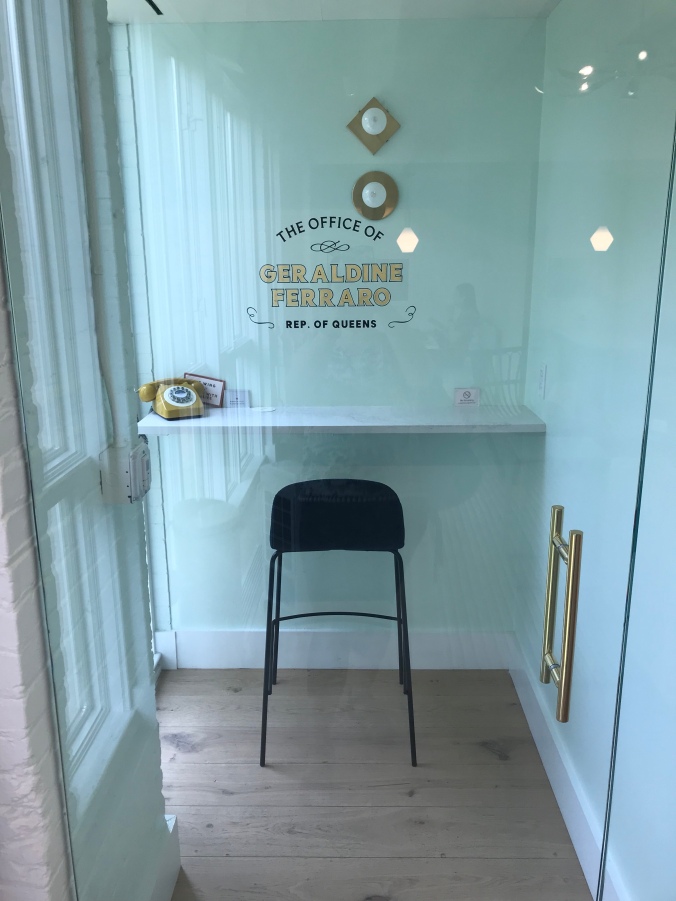 It’s a millennial’s paradise – from the avocado toast to the rosé happy hour to the signs everywhere reminding you to register to vote. Plus the “powder room” features luxury hair and body products (for free) and has robes and slippers in addition to usual shower offerings.

My personal favorite: THE LIBRARY. Thousands of books (color coordinated, one of my favorite nonsensical design choices) all by and about women, that you can browse in person or check out for a month at a time. Be still my nerdy heart! 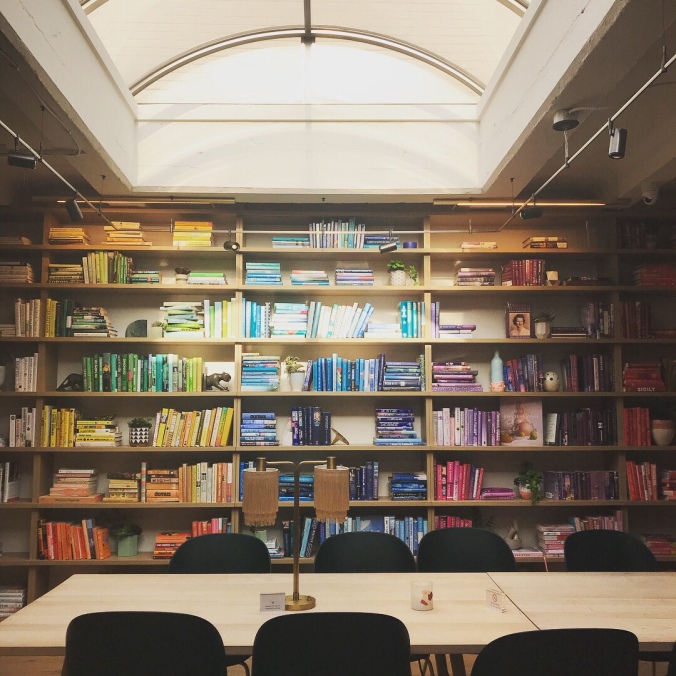 In theory there are plans for a Wing in Boston in the not too distant future. Given how awesomely powerful this space was, I’ll definitely be checking it out when the time comes. And for now I’ll just pop in when I visit Meg and make her borrow #allthebooks on her account.

(There’s a lot more to this idea beyond how beautiful this place is – check it out on The Wing’s website. Their slogan – and this blog title – roughly translates into “Nothing is heavy for those who have wings.”)

From my first Clinton rally in the 90s

To my college days canvassing in Western Mass 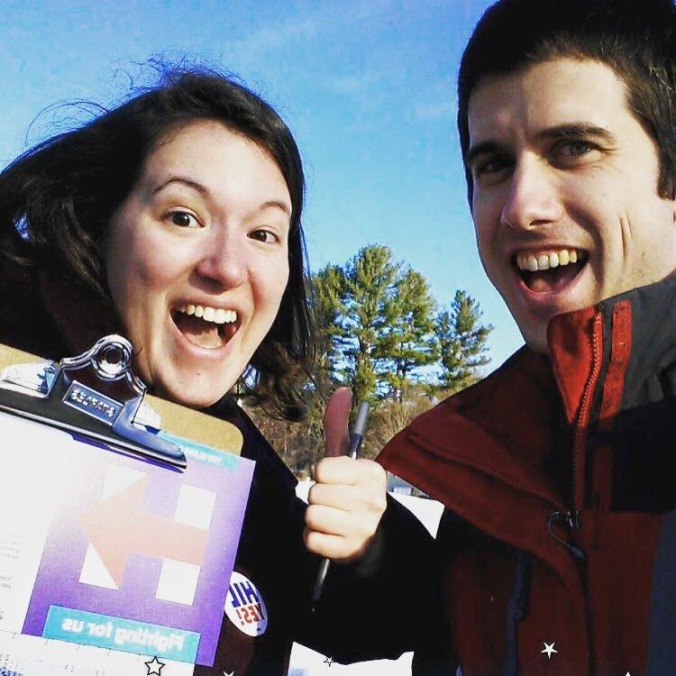 I’m not afraid of having to work hard for something – and someone I believe in.

And neither is she.

This is the world we’ve been given. The problem we have the honor of solving. The people we get the privilege to help.

And as these are the cards – the feminist, intelligent, compassionate, strategic, joyful, inspiring cards – our deck is stacked with

So proud to watch history unfold tonight and so ready to watch the glass crumble to dust when we smash through that ceiling in November.

I love the Oscars – their glitz, glamour, and short moment in history honoring the movies of the past year.  As always, we’re having our annual Oscar party tonight (with recipes to follow).

In the lead up to this year’s Academy Awards, my office’s chatter has drifted away from recipe puns and toward something with much bigger consequences: the Bechdel test.

From Feminist Frequency, “The Bechdel Test or the Mo Movie Measure is a type of litmus test to assess the presence of women in movies.  It originated from Allison Bechdel’s comic “Dykes to Watch Out For” in 1985.”

There are just three requirements for a film to pass:

1. It has to have at least two [named] women in it
2. Who talk to each other
3. About something besides a man

Looking at that list of requirements, you’d think that this isn’t a hard thing to accomplish.  Women with names, talking to each other about something other than a man.  Flip it around to be about men and it would describe nearly every blockbuster of the last 50 years.  And yet, some great movies fail.  How do yours stack up?

But let’s let bygones be bygones – surely in 2014, studios are doing better at realizing that women are people – fabulous, talented, multi-dimensional people – right?

Of the nine movies nominated for best picture tonight, here’s how they stack up:

Beyond the awards, we’re starting to see a shift – a review of the highest grossing films of 2013 showed that the biggest blockbusters cleared the bar.  Yet the majority of films still fall extremely short.

As movie lovers, let’s support films – and the individuals that make them up – who are committed to showing women as people and not just decoration.  Here’s hoping that by the next Academy Awards, we’ll have made more progress to celebrate together.

“At what point must a female senator raise her hand or her voice to be recognized over her male colleagues in the room?”

Texas State Senator Leticia Van De Putte never got her answer last night, at the end of the filibuster started by Senator Wendy Davis in protest over restrictions that would make it even harder for women in Texas to get legal, safe abortions.  Instead, the crowd erupted into cheers, which lasted well after midnight, well after the session ended, and well into the night as protests continued to rise over misinformation that said that SB5 had passed.  This morning, we’re learning that the bill failed – whatever lame reason the Lt. Governor is giving notwithstanding, we live to fight another day.

But before we more on to equality and climate change and all the other ridiculous problems we need to solve, I want to answer the Senator’s question:

Stand up today, and don’t sit down until we have equality between genders.
Raise your hand immediately and don’t put it down until you’re satisfied that women’s lives won’t be the subject of petty political bickering.
Shout your opinion until you’re hoarse and you’re being taken away in handcuffs just for asking that women get to have rule over their own bodies.  Then, shout it again from your jail cell until your sisters come to bail you out.
Stand in long lines to vote, stand on street corners to collect signatures for your own political run, stand arm in arm as they try to carry us away and deny us our right to protest.

One of my colleagues hit it home when she said “I wish I could imagine a world in which a bunch of women stand around desperately trying to legislate control over a man’s body, but I honestly can’t.”  I’m done being a second class citizen, done with having someone make my decisions for me, done with this patriarchal bullshit.  We can do better.

Please join me in supporting EMILY’s List to put more pro-choice women in office – and stand now, tonight, and tomorrow toward the equal future we all know is possible.

That’s me as Rosie the Riveter at a Halloween party this weekend. I realized on my way there that this is the third year in a row I’ve portrayed an awesome lady leader (or symbol) with my Halloween costume.

Since we went to a house party last night, I was relieved to see a binder full of women on my way to the gym this afternoon. My Halloween wouldn’t have been complete without it!

What awesome costumes did you wear or see this year?

It exists, it’s in my building, and it’s not as easy to talk about as you might think. 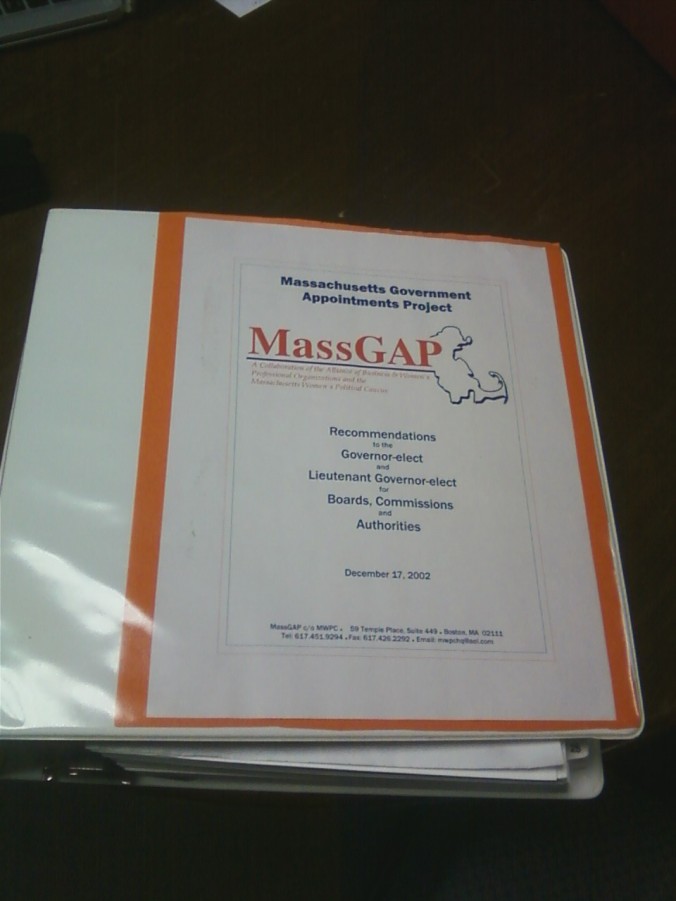 My friend Priti is doing some great work here in MA, helping to get women elected and engaged in all parts of the political process.  So when I heard that she had the “binder full of women,” I knew it was in good hands.  Good non-partisan hands – because equal opportunity of women in government is an issue that deserves discussion beyond this Presidential campaign, beyond this year – it’s something we should all be concerned about year-round, and working to solve even when it’s not in the news for a hot second.  Why should it be amazing to have 42% of government appointees be women when they make up more than half of the electorate?  This is a question for our time, not just the next 18 days.

Check out a clip of her on CNN here to see what’s really at stake when we have to make binders full of women’s resumes to prove that qualified women exist.

Here’s a Mount Holyoke woman truly making history – and making sure that the change she works toward extends well beyond one sound bite at a debate.  My hat’s off to you, Priti!

I don’t really have words for the insanity for the last month, so let’s pretend that we already discussed it and are now ready to dive into March, however untrue that may be.

Thanks to a jam-packed bookstore in DC, I’ve had a few good books to read in the last week, but now I’m craving more.  Here’s what’s on my shelf (and my Google reader) right now – what about yours?