In January, my sister Kat brought our family on our first-ever cruise as part of a writers’ conference where she was a member of the faculty. Only mom had been on a cruise before, back in the era of perms and festive centerpieces made of lard (yes, really). It was a new adventure for us all – I imagine that people who don’t fly often feel the same way about planes. The small tv and its limited channels! Small nut-free snacks! A teeny bathroom!

This trip – on Royal Caribbean’s Brilliance of the Sea – had similar exciting and uncharted territories, and we loved exploring them all. Here are some of the top things I learned along the way:

ONE: You can ask your steward and waiter for anything. When Kat and I arrived in our room, the beds were together as a queen. And while that seemed cozy, we knew it would not be fun for the long term. So we asked our steward, Nicholas, to separate them for us, which he did in a heartbeat, and they were perfect by turndown service. (Mark that as the #1 thing I wish I could take home from cruising – such a treat!)

TWO: Eat your dinner. And then some. Dinner is absolutely positively not to be missed. Bring some nice clothes to dress up and make an evening out of it (I recommend getting the early seating if possible so you can then scurry over to the evening entertainment). Our table consisted of my family, the tour hosts, a nice young couple, and a rotating cast of writers. The waitstaff was SO friendly and nice. Maybe a little TOO nice. When we couldn’t decide between options, our waitress encouraged us to try them both. It got to the point that by the end of the cruise, every person at the table was ordering an average of 5 items for a 3 course dinner. 3 desserts, 2 salads, steak and lobster… it was downright absurd. I think we all wanted to know if there was a limit, and the answer was a definitive NO. Whether or not you’re going to order the entire menu, feel free to ask a lot of questions – it’s especially useful to know which options are for one night only and which are going to be available tomorrow (you know, for everyone else who plans their food a week in advance).

THREE: Embrace your inner tourist. Cruising is basically summer camp. By the end of the week, you’ve seen the same people all over. You know who lost at Bingo and who can kill it at karaoke, and who was supposed to go snorkeling before it started raining. But to get there, you need to go to the ship events – especially in the beginning. Every trivia night, stage show, belly flop contest is part of building a cruise community of ship-bound weirdos. Our family won trivia and dad put up a good fight in a musical contest. We also learned choreographed dances, laughed our butts off at “game shows”, and went to an art auction- highly recommended, especially if you will never go in real life. Mark everything you’re interested in on the daily schedule and then check them all out – you might find something you seriously love!

Also: if you think the captain is taking pictures right now, don’t listen to the people who tell you it’s later. You WILL miss it and make your family basically stalk the captain so you can get a classic shot together.

All dressed up for the formal dinner – with no captain in sight.

FOUR: Plan your excursions strategically. Better to book early and cancel (24+ hours before and you get a full refund for most) than to find out that the one you want is all full. And when you do book, go for excursions that start as soon as you get off the boat.

We tried both options (not intentionally): in Cozumel, we got off the boat, found our tour group, and spent the morning at ruins and getting an island tour before going off on our own for shopping downtown. In Grand Cayman, we ate and wandered first before going back for our snorkel adventure. Rushing to get back for the group outing was not fun – we lost a lot of time because we wanted to make sure we didn’t miss the next phase. We preferred having the afternoon free so we could manage our own return to the ship, instead. BUT! There is a plus side to doing the ship-led adventure last – on our trip, some people got extremely delayed when their snorkel boat was unable to dock in high winds. The only reason the ship waited for them (instead of making them fly to the next port!) was because they were on a ship-led trip and thus were guaranteed not to miss the departure. Definitely something to consider when planning your day out (and do go out – the ship will be there when you get back!). 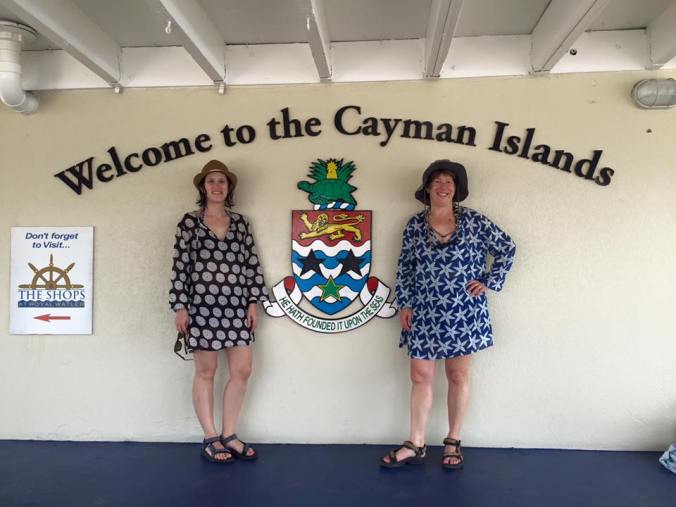 FIVE: Pack like you’re camping. Weird, I know. But I assumed that there would be at least some nice shampoo in the shower, and there was only an all-purpose soap. Similarly, I wished I had a small bag (really a clutch) for holding my keycard and camera as we ran around the ship in the evening. Specifically, make sure you bring:

Bottom line: our first cruise was a huge success. It also opened my eyes to how fun an all-inclusive really could be – all this plus NOT feeling like your stomach was in knots! But falling asleep on the ocean and waking up in a bustling tropical port is a delight, as is a week of limited (but lovely) choices and forced relaxation.

What do you wish YOU had known before your first cruise?