It’s finally here. The moment we have been waiting for these almost-30 years (of you know, the fifteen since I first saw the movie) – WE ARE LIVING IN THE FUTURE! 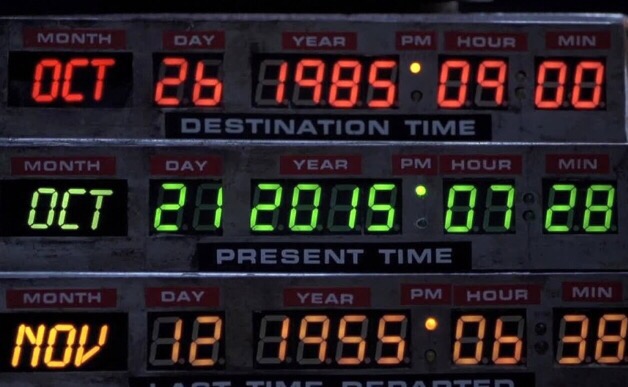 Back to the Future II is one of my favorite movies (just ask anyone who has seen my OKCupid profile!). I love the campiness, the simplicity of its time-travel logic, and the specificity of what the future will hold. Doors that open based on your fingerprint! Holographic movies! Lots of frozen “food”! Video calls instead of just talking with our voices!

And of course, hover boards and self-tying shoes.

We’re still working on those final two – but some of those other cinematic predictions really have come to pass. Drones are used in reporting. Our phones unlock through fingerprint scans. And the Cubs are still (temporarily?) in the running for World Series champs.

Part of what I love about these movies – once I get past my crush on Michael J Fox – is that in this vision of the future, the world isn’t perfect but hope also isn’t totally lost. I feel like the narrative I’ve seen in movies lately is a bit more helpless – either because the world is wasted by overpopulation or climate change or that ever-possible asteroid. While our leaders debate whether or not God has endorsed them as a candidate and what server one should use for work emails, our films show the real issues that line our fears of the future – and the threats that go far beyond the danger of a simple sports almanac. I prefer the BTTF version, where any challenge can still be overcome, to the modern idea that the future is set… and looking pretty gray.

Raise a glass of Pepsi Perfect to the film that somewhat accurately showed us what this day could hold – and reminded us that even in 2015, our densities… I mean, destinies… can still change.