I’m never embarrassed to be a geek, especially when my source material is an amazing book.  So when I realized that the Warner Brothers studio where they filmed Harry Potter was a day-trip away from London, I rearranged my schedule to make sure Katie and I could go.

On the Knight Bus – destination: adventure!

“The Making of Harry Potter” in Leavesden is a marketing marvel, intended exactly for mega fans like us – and it delivered on all the hype.  From the cupboard under the stairs that greets you while you wait in line to the sweet butterbeer to the magical music being played throughout, it kept us captivated and fighting small kids for space in front of exhibits. 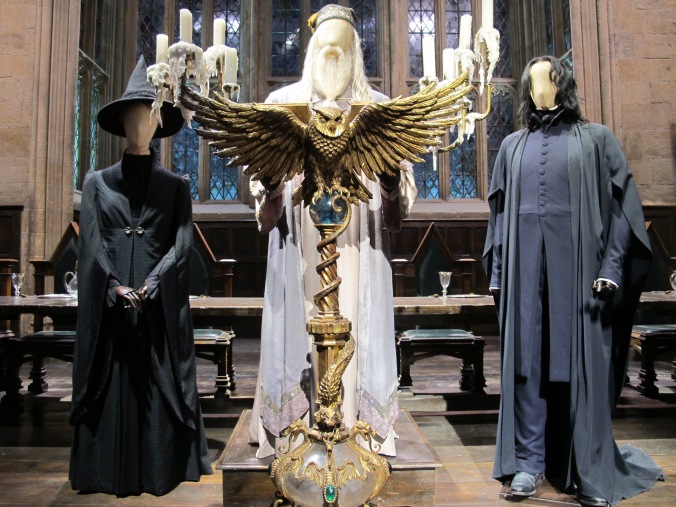 Dumbledore presiding over the main hall

The opening movie, featuring Daniel Radcliffe, Emma Watson, and Rupert Grint, was a stark reminder that we weren’t just looking at the real-life equivalent of the Hogwarts we know and love – this was a functioning movie set.  Much, much more functioning than I even imagined – in this era of CGI, I assumed that almost all the cool stuff had been added later with animation. In reality, it was enhanced with animation, but many of the greatest features actually had to be created by someone first.  From the intricately locking doors at Gringotts to a life-sized model of Buckbeak to the winding griffin staircase that leads to Dumbledore’s office (which was apparently the hardest thing to build), the film crew made the magic real. 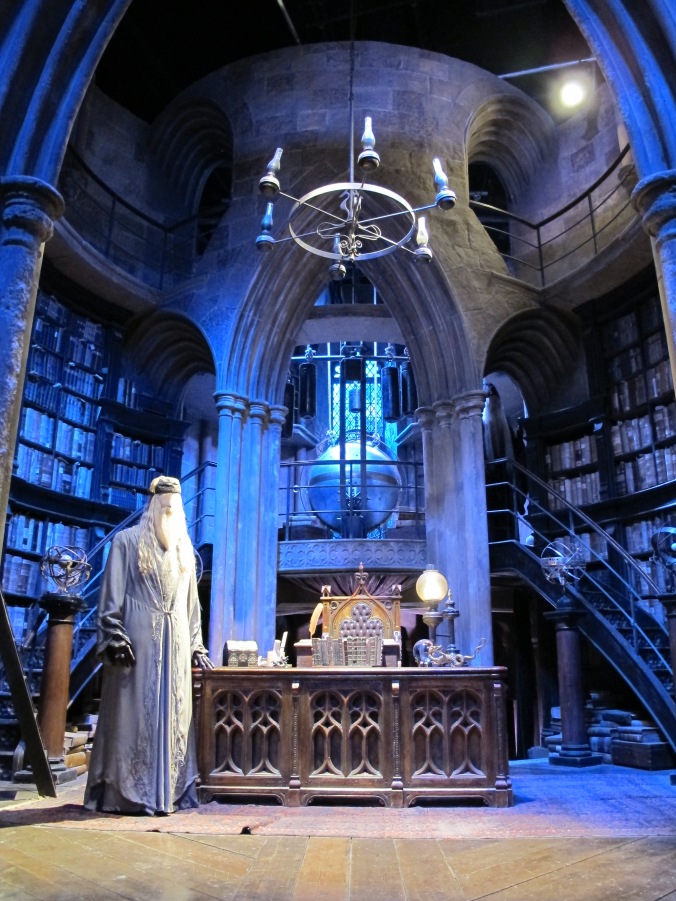 The level of detail throughout was just staggering – all the wand boxes are hand painted, all the portraits of headmasters have sleeping AND awake versions.  Nothing escaped the shrewd eyes of the crew – and we, as the fans, are still reaping the benefits.

Diagon Alley. complete with death eaters strolling around to add some Halloween “cheer”

The piece that really took the cake was the scale model of Hogwarts.  It was painstakingly built so it could be used for ALL the shots of the castle from far away.  There was no other model – this is the only version of all of Hogwarts that ever existed, and it’s incredible.  There’s a miniature telescope outside Dumbledore’s office, little rocks scattered in the forest, and broken steps leading to the owlery.  The miniature clocks move, and were adjusted to match the time for every scene.  It was just spectacular – as you watch, the lights change and music swells so if you stay in this room long enough, you get to see whole days pass at the castle you know and love.

It was an amazing day – one I’ll never forget – of indulging my imagination with my best friend.  Everyone should go and let their childish tendencies run wild for a little bit.  More than half the people here were adults our age or older, and we were all instantly transported back to the time when we first met that boy with the lightning bolt scar.

My top tips for getting the most out of your trip: