Ten years ago this week, the best show on television premiered.

I remember the moment when I fell in love with Ryan, Marissa, and all the other stuck-up surfers of Orange County.  My cousin Fleur was visiting from France, and we had spent the day at the mall, walking past posters featuring sun-kissed hunks declaring “It’s nothing like where you live… and nothing like what you imagine.”  After we shopped ’til we dropped, we spent the evening in my basement, where we tuned into this mysterious new TV show that promised to be the best 7 hours of our summer.  And it was.  I spent the night making excuses to Fleur “I swear, this is NOT what parties look like in NH…” and by the time the episode ended, we were both hooked.

Over the next four years, the O.C. took me on a wild roller coaster of emotions – would Marissa pick the bad boy or the hot jock… or the rocker chick?  Would Seth ever get the girl?  Would Sandy run out of puns?  Would we really suspend our disbelief that these “kids” were still in high school? And with every rewatched VHS, then DVD, it also took me from the end of high school onto the adventure of leaving home and going on to college.

It gave me the strength to ask that guy to come to a New Year’s party… and then years later, to finally kiss him, because “the way you spend the new year is the way you’re going to spend the rest of the year.”

It introduced me to the mojito – if it was good enough for Marissa Cooper, it was worth trying, and quickly became my favorite drink.  I’ll let you know if/when I finally get tired of it.

It showed me a side of the country – the Pacific Ocean – that I had never visited.  When I finally did, there were decidedly fewer water polo players having bonfires on the beach, but still great views and romantic lifeguard stands.

It led me to new friends – Sarah, Steph, and countless other MoHos bonded over sharing the tv in our first year dorm, then I watched the dvds with my flatmates in London as the show was winding down stateside.

It made me love new music – the first soundtrack is still one of my favorite CDs of all time.

It forced me to think about our criminal justice system, and our class system, and why we don’t all get to have cotillion dances with or without brawls between the dads on the dance floor.

It brought me out of my London flat to meet my favorite water polo as he starred in Tennessee Williams’s Summer and Smoke – the run got cut short and I rushed to make it to the last performance.  My reward: a handshake, autograph, and photo with Chris Carmack aka Luke.  He was so nice in person, it’s hard to believe he could pull off being such a jerk on the show. 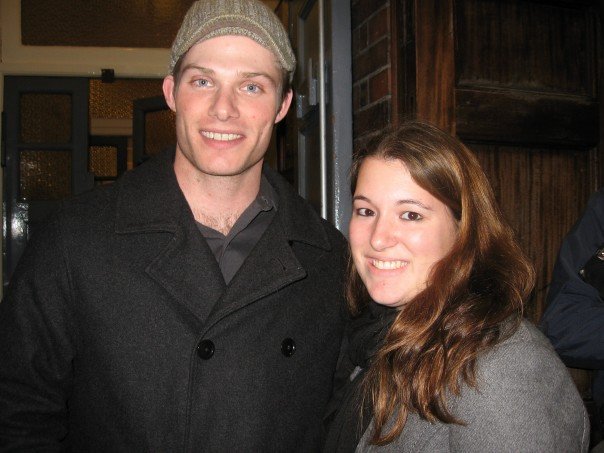 My fellow Yankee in the land of the Brits, London 2006

It satisfied my dorky side, my cheesy side, my overly optimistic side, my dramatic side – from Spiderman kisses to flaming car crashes to adorable outfits to snarky one-liners, it captured what it meant to be 18-22 year old me.

And all these years later, it still gives me and Fleur something to talk about.  Though I swear, that’s not how we all party… or drive… or dress… or talk.

But it is part of the story of how I became who I am.  Happy ten year anniversary, OC!