Last night, I got to hold my best friend’s hand as we watched the election results come in and victories unfold around us.

For women.
For equality.
For students and sick kids.
For working mothers who deserve equal pay.
For people who believe in a better future for this country.
For a renewed vision for tomorrow.

When my great grandmother came to this country in the early days of the last century, she never would have imagined the scene I saw last night.  In my home state of New Hampshire, women now make up the entire Congressional delegation, and we’ve elected an amazing woman to serve as our second female governor AND made history with the first female Senator from MA.  She, who fought for an end to segregation and was there when Martin Luther King, Jr. shared his dream, would have wept to see the spread of justice in the form of victories for marriage equality.  She would have been stunned into silence at the idea of a black man not just winning the presidency, but doing it twice.  And she, who trained her son who trained his daughter who trained her daughter – me – to stand up for what you believe in would have been right beside me all weekend as I phone banked, canvassed, and waited in the cold for two hours to cast my ballot for amazing candidates. 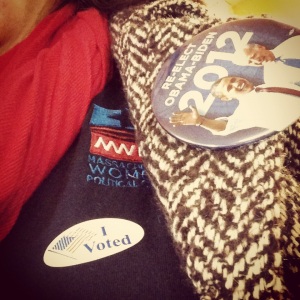 From the state rep races in Michigan (congrats Dian!) to marriage equality in Maine to NH swinging blue to record-high turnout and people waiting in lines for hours just to do their civic duty, it was a night to remember.

I am so proud of our victories last night – and I’m so excited to see what amazing things we’re going to do in the years ahead.