Yeah, that’s right.  I did it, and I came out on the other side (literally).

Nolan and I recently made us of my Mapparium Buy With Me right before it expired, and got to walk inside and hear about this old stained glass dome.  We got there right before the tour started so we didn’t get to explore the entire exhibit, but we did get to walk inside the three story tall stained glass dome at the Mary Baker Eddy Library.  This map is the only place on the world where you can see the north pole and the south pole at the same time. Trippy, right?  Supposedly, it’s the only way to see the distance of countries from each other on the world’s surface, but I find this claim misleading because the countries are backward – from the center of the earth, facing the US, Europe is to the right of North America, but if I was really inside the earth, it should be on my left… right?  The distances might be accurate, but the directions are off.

The maps on this globe haven’t been updated since it was created in 1935.  On the tour, they said that there are 65 new countries that have been formed since this map was made.  However, we were there on the actual day South Sudan became a country (Kat, you ready to learn a new country yet?), so it’s really 66 now.  It includes places like Siam, the USSR, and a bunch of African countries with colonial names.

Overall, definitely worth $6 on a hot afternoon.  A word to the weak and weary though – when they say that sound in this dome projects, they mean it for real.  It felt like every person was whispering right in my ear – and then when the baby on our tour started crying, it rang through my head like there were 10 of her.  We scurried out after that, hence, no pictures. 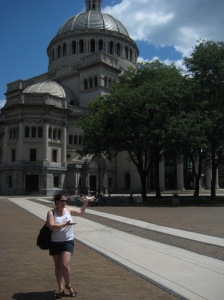 But here’s me in front of the Christian Science Church, where we saw one of the world’s largest organs (over 13,000 pipes!!), toured the really interesting architecture, and got a cool tour from a church member.   I’d actually recommend the (free) church tour almost more than the Mapparium, though you have to go in with an open mind because while no one will actively try to convert you, they will almost certainly share their stories of how they were healed.   The history and architecture makes it worth it, though.   I had no clue until this that the Christian Scientists have no clergy, but it’s a shame people can’t get married here, because the building is gorgeous (also air conditioned, which is a plus for hot days).  If you go, let me know what you think!

If you’ve met me, you know I love bragging about my friends and their accomplishments.  I talk to people from my hometown and college crowd a bit and I always have the good news update – who bought a house, got married, got a new gig with a national tour (yay Nolan!).  So, this Monday I wanted to introduce you to a newer friend, Stephie Coplan.  Stephie went to school with Matt, and is a rising singer-songwriter who I’ve had the pleasure of seeing in person not too long ago.  I really like this cover of hers, which Fountains of Wayne themselves acknowledged and admired.  Can you blame them?